The IIP for the month of July 2017 was slightly higher at 1.2% compared to the negative growth shown in the month of June. However, manufacturing continued to disappoint. This IIP number was important for a variety of reasons. For the first quarter ended June 2017, the GDP had come at a multi-year low of just 5.7%. This had positioned the Indian economy a full 100 points below the Chinese economy in terms of economic growth. Even on the GDP front the major pressure came from the manufacturing sector with the SME sector being the worst hit due to the lag effect of demonetization. Additionally, the precautionary strategy around GST was also coaxing manufacturers to focus more on inventory depletion rather than on fresh production.

How the IIP has panned out in the last 1 year… 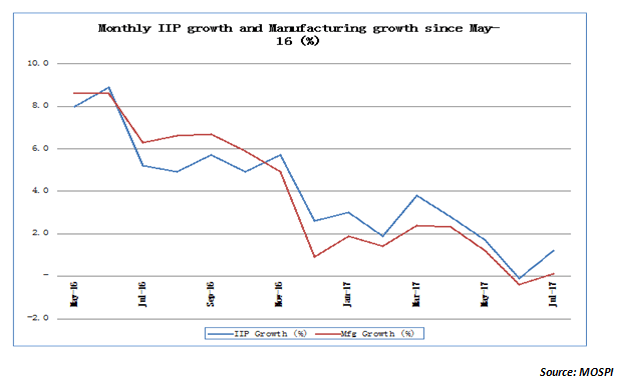 IIP for the month of July 2017 was marginally in positive territory but that is not to say much because the overall trend of IIP over the last 1 year has been clearly downward. Let us look at the key components of the IIP. Mining flattered with a growth of 4.8% while electricity flattered with a growth of 6.5%. The disappointment, however, came from the manufacturing sector which was almost flat at 0.1% growth. While mining and electricity are largely driven by government policy and public sector investments, it is manufacturing that is lagging due to weak private sector investment and tepid production focus in the light of the confusion surrounding the GST. Even if we consider a slightly broader time frame and consider the first 4 months of this fiscal (Apr-Jul), the cumulative growth for the manufacturing sector is just about 1.3%. That is not indicative of any immediate pick up that could be seen either in the GDP numbers or in the quarterly sales and profits of Indian companies.

How the sectoral mix of manufacturing worked out…

Only 8 out of the 23 manufacturing sectors showed positive growth with 15 showing negative growth during the month of July. Apart from products related to mining and electricity, we saw positive contributions from Hot Rolled Coils (HRC), sheets and two wheelers. In fact, the steel sector has been a consistent positive contributor to IIP due to a combination of favourable government policy with respect to countervailing duties and a sharp pick-up in global demand led by China. The pick-up in two wheelers output is a tad surprising and could be attributed to the fact that the lag effect of demonetization and the concerns over GST may be finally waning. Digestive enzymes also showed a positive growth but that is more due to its inclusion in the new series IIP.

On the negative side, electrical goods which are normally demanded by the construction sector saw de-growth. Pharma sector also saw de-growth overall as the global headwinds are becoming more acute, especially from the FDA. With diesel cars increasingly raising environmental questions, this sector also saw a fall in production. Additionally, tobacco products have also seen de-growth on the back of an unfavourable duty structure for the industry.

What are the indications on the capital cycle?

It needs to be remembered that the IIP number has an important bearing on the overall GDP growth as well as on quarterly corporate numbers. With the Indian industry operating at around 70% capacity utilization, the capital cycle revival will largely depend on demand. If we look at IIP of capital goods in user terms, the growth is -1% for July but this is sharply better than the level of -3.5% recorded for the cumulative first four months of the fiscal. Additionally, this sector used to de-grow at around -20% in the last 2 years. From that perspective, there are green-shoots of recovery that are visible in the capital goods segment. This is important because the capital goods sector has a strong multiplier effect on overall IIP and GDP growth.

Can the RBI give a big push; else what is the agenda?

A higher inflation level will preclude the possibility of any rate cut in the October meet. But the RBI may have to look at the interest rates from a different perspective altogether. The interest rates have been cut by nearly 200 bps in the last 2 years but then inflation has fallen more rapidly. As a result, the real interest rates are still relatively high by global standards. It is difficult for corporates to borrow at current levels when even the government of India is borrowing at around 400-450 bps of real interest rate. From that perspective, an aggressive rate cut may be the right strategy.

Aggressive rate cuts will have another positive spilloff. It will stem the inflow of hot money which is artificially propping up the INR. If the manufacturing and the SME sectors have to bounce back, then a major push to exports is a must. And, exports are unlikely to pick up unless the INR weakens from the current level. Thus an aggressive cut in interest rates will achieve the dual purpose of making the real interest rates more palatable as well as the INR weaker. If the RBI relents to this strategy, we may see a genuine pull back in IIP numbers!