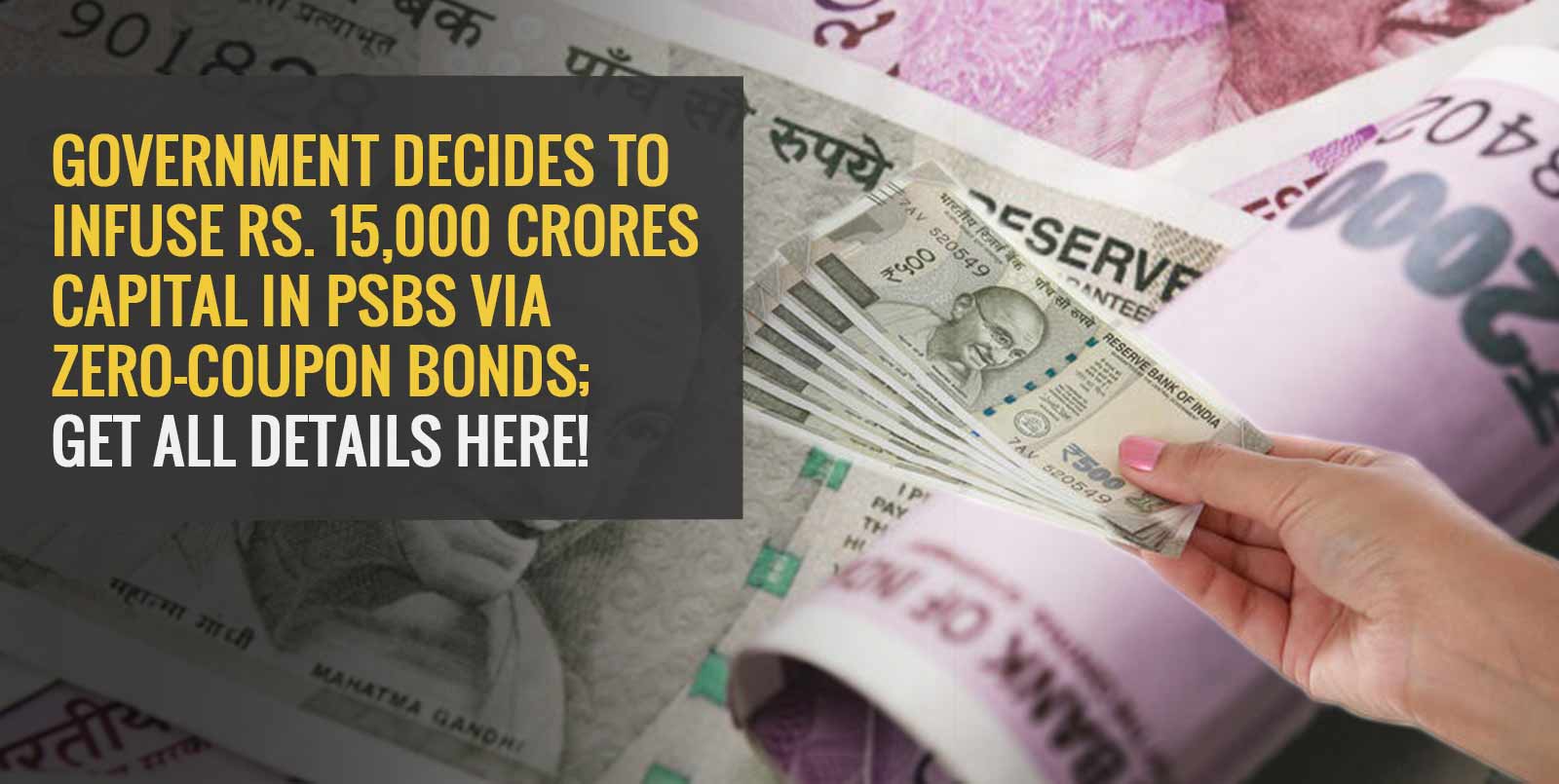 The Government has decided to infuse capital of Rs. 15,000 crores to support the public sector banks for FY 2022. State-owned banks like the Central Bank of India, Punjab and Sind bank are supposed to get this lion’s share through zero-coupon bonds. This will support and enable these weak banks to meet the regulatory requirements. This recapitalisation plan by the Government will further help the more ailing state-owned banks meet the required level of capital support and improve the health of PSBs.

What Is on Offer?

Weak state-owned banks will get a capital infusion of Rs. 15,000 crores in the second half of March 2022, which will further help these lenders meet the constricted capital-reserve norms. The lenders still facing the lending curbs will be the biggest gainer with this latest plan of funding by the Government.

Punjab and Sind Bank and the Central Bank of India are likely to be the biggest inheritors of this plan. Apart from that, the measure of support is yet to be decided, as per sources. This will be done through non-interest-bearing bonds with a tenure of 10 to 15 years and will be issued with a face value discount at par, thus lowering the effective Tier 1 capital levels than the regulatory requirements.

How Will Recapitalisation Processing be Done?

As per Budget 2022-23, the capital infusion target is trimmed from Rs. 20,000 crores to Rs. 15,000 crores as was estimated for 2021-22. The infused capital will be distributed to banks that got money in the previous year through zero-coupon bonds as RBI raised some concerns regarding the methods’ fair valuation.

The recapitalisation process will start as soon as the PSBs provide their capital requirements for this fiscal year as asked by the financial services department. Further, the Government will allocate a revised Rs. 15,000 crores funds in the next month. It will be done starting 1 April 2022 as previously no funds were distributed to the public sector banks.

Punjab and Sind Bank were the first to receive capital infusion through bonds bearing no interest in the third quarter. Further, in an earlier month, they raised capital equity worth Rs. 4,600 crores after getting board approval and issuing the Government some preference shares.

This decision from the Government to infuse capital in the PSUs will help these banks strengthen their capital to the required levels. Henceforth, it will save the PSBs from coming under the PCA (prompt corrective action) framework.

These PSBs show better competitiveness than last year and would require higher yields from markets to raise equity in Additional Tier 1 (AT1) capitals. Further valuing these zero-interest bonds at a reasonable level can help to make the banking sector much healthier and raise equity or AT1 in the next term without solely depending on the Government.

How Will the Zero-coupon Bonds Help?

Government funding is made chiefly through the recapitalisation bonds that carry no interest. For five years, Rs. 34,997 crores has been the budgetary support lent by the Government.

As per India Ratings and Research, fair valuing of the equity inundated by the Indian Government in five PSBs can lower the capital levels of Tier 1 in the basis points ranging from 50 to 175. Further, these bonds can reduce the net worth by 50 per cent at the end of the financial year 2022 and mark the beginning of similar maturity papers as they carry no interest. Further, India ratings stated that these securities discount the face value due to their illiquid and non-trading nature.

RBI raised some fair valuation concerns regarding the methods of infusing capital to the banks in the previous year through zero-interest bonds. RBI stated that the face value was higher than the present recapitalisation value made through the non-interest bonds issued at a discount. But this recapitalisation move from the Government has provided adequate capital support to public sector banks and helped them come out of bad debt.

Furthermore, a huge reduction in the number of banks under the Reserve Bank of India’s PCA framework has been seen and stands as of now to one. It is further expected that the finance ministry will indulge in providing capital to Indian Overseas Bank, which has been identified as a candidate for privatisation. These capital funds will shore up the banking sector’s health while also helping the Government realise a better valuation.

Don’t forget to keep an eye on our blogs for similar news and updates on the stock market and IPOs.

As of writing, shares of the Central Bank of India were trading at Rs. 18.15 apiece on the National Stock Exchange.

The Indian Government and the Ministry of Finance are the current owners of Punjab National Bank.

As of now, no statement has been made regarding the privatisation of the Indian Overseas Bank and Central Bank of India.