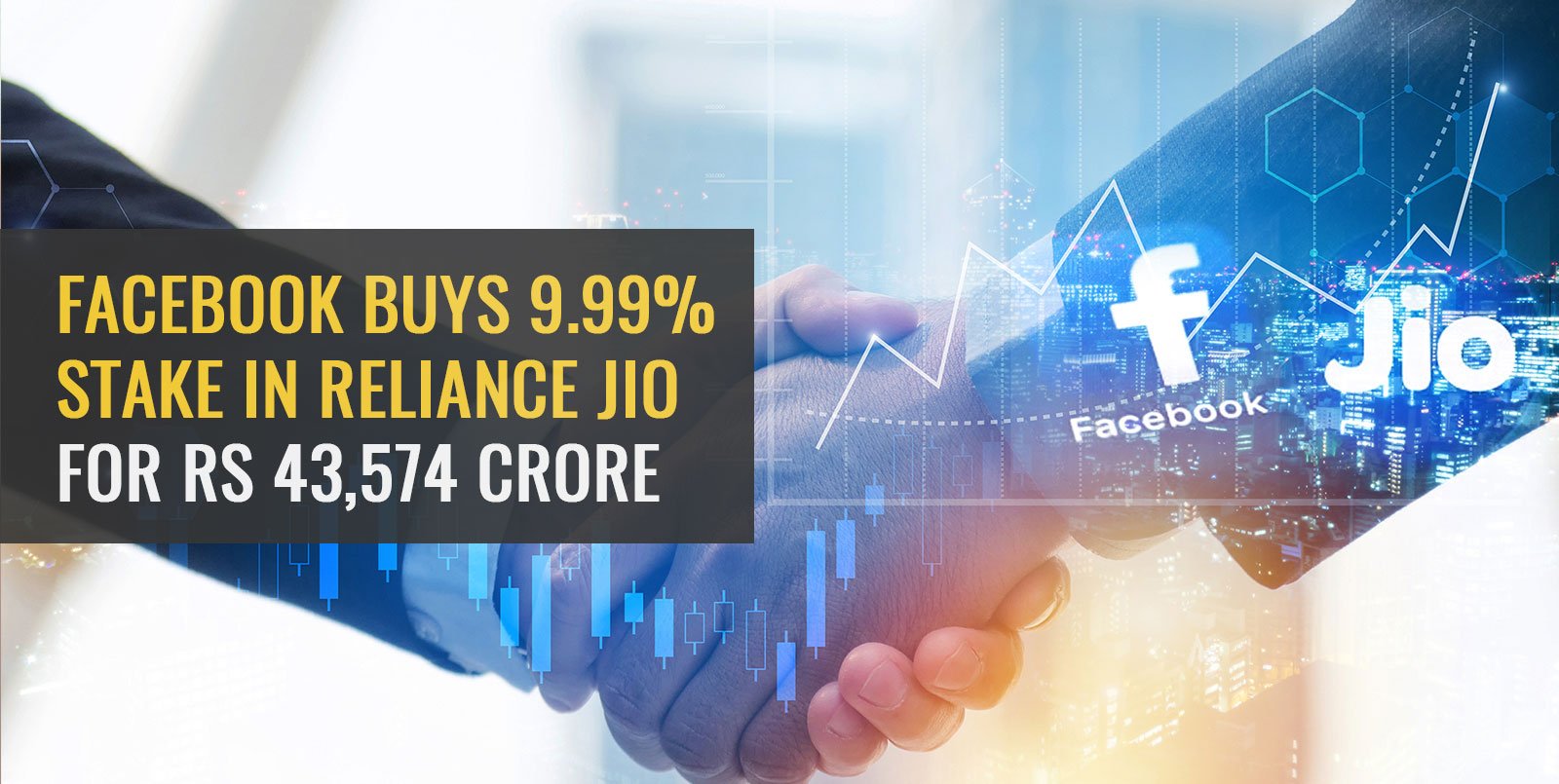 India has been hit hard by the Covid-19 pandemic. A national lockdown has been imposed and economic activity has come to a halt. Experts believe the Covid-19 pandemic will push the world into recession. The stock market rout in March was a reflection of the grim forecast. But India’s largest company by revenue and profits—Reliance Industries Limited—managed to surprise shareholders and investors with the announcement of a partnership that sent its stock soaring. Social media giant Facebook has decided to invest $5.7 billion (Rs 43,574 crore) in Jio Platforms, a unit of RIL, for a 9.99% stake in the Indian company. RIL has significant weightage in benchmark indices like Nifty 50 and Sensex and a rally in its shares has helped the indices too. The Reliance Jio-Facebook deal is significant for both the entities, but what is the rationale behind the investment?

Details of the transaction

RIL promoter Mukesh Ambani had been preparing for the deal for some time now. In October 2019, Ambani had consolidated all the digital businesses of RIL into a subsidiary, which was structured as a debt-free entity to attract global investors like Facebook. Jio Platforms consists of all the digital properties of RIL like JioSaavn, JioCinema, JioNews and JioTV and holds 100% stake in Reliance Jio Infocomm, the largest telecom operator in India. The Jio-Facebook deal values the entity at $57 billion. Of the total $5.7 billion that will be injected into Jio Platforms, $4.1 billion will likely be paid back to parent RIL and the balance will be used for expansion.

What is in it for RIL?

The deal between Jio and Facebook is consequential. The investment by the US-based technology company is the largest for a minority stake anywhere in the world. The numbers are huge, but what got lost behind the billions of dollars is a commercial agreement between various entities. Along with the investment pact, Jio Platforms, Reliance Retail and WhatsApp signed a commercial agreement to leverage the capabilities of JioMart and WhatsApp to grow both the businesses. Long before the Jio-Facebook deal, Ambani had formulated a plan to develop a hybrid physical and digital retail platform. JioMart was designed to digitally empower 30 million unique neighbourhood stores spread across the country and connect them to customers in their vicinity.

JioMart needed a seamless payment and communications platform to increase the efficiency of the model. RIL had launched JioMoney, but the app failed to get much traction in the crowded digital payments space. WhatsApp, which has a humongous user base of 400 million in India, had received permission to expand its payment service in a phased manner. Commercially collaborating with WhatsApp will give Jio Platforms easy access to a large user base, a payment system and a channel for communication. The communication channel of WhatsApp could also be used for selling financial products like insurance and small loans in future.

Another major benefit of the Reliance Jio-Facebook deal for the Indian behemoth is the much-needed capital infusion. After years of aggressive expansion, RIL is saddled with net debt of Rs 1.53 lakh crore. Ambani has a stated aim of making the company net debt-free by 2021. The success of the target depended on a $15 billion deal with Saudi Aramco, which was announced last year. But with a crash in oil prices, the deal is likely to get delayed. The capital infused by Facebook will help Ambani reduce the debt load of RIL.

No deal in the world is designed to benefit just one of the entities and the Jio-Facebook deal is no different. Even though WhatsApp has 400 million users in India, Facebook earns almost nothing from the popular app. Facebook has been trying to monetise the app but to no avail. The Jio and Facebook deal with an aim to commercialise the platform may provide Facebook with an opportunity to earn from the popular app. Facebook has also been trying to integrate payments with WhatsApp, but strict data localisation norms have become a roadblock. Facebook has tried to adhere to data localisation rules in the last few years, but still, the regulatory approvals have been slow. Having an influential local partner like RIL may help in accelerating the rollout of WhatsApp pay.

The Jio-Facebook deal has the power to change the retail dynamics of the country. A key impediment could be the synergy between the technology giants. Both companies plan to operate their respective platforms independently. If they could get the synergy right, the partnership will have a profound impact on how people buy goods in the country.