The core sector numbers for the month of May 2017 were announced on June 30th. The core sector forms an important part of IIP calculation as under the new series it constitutes nearly 40.2% of the overall IIP composition. The core sector essentially consists of 8 core sectors that form the backbone of economic growth and have strong externalities in terms of downstream growth. These 8 sectors include Coal, crude oil, natural gas, refinery products, fertilizers, steel, cement and electricity. All these 8 sectors have strong externalities and hence are critical sectors from the perspective of outlining the trajectory of future growth in IIP and GDP. Also, companies in these sectors tend to have a major weightage in the stock market indices and therefore they also impact corporate profitability as well as stock market performance. 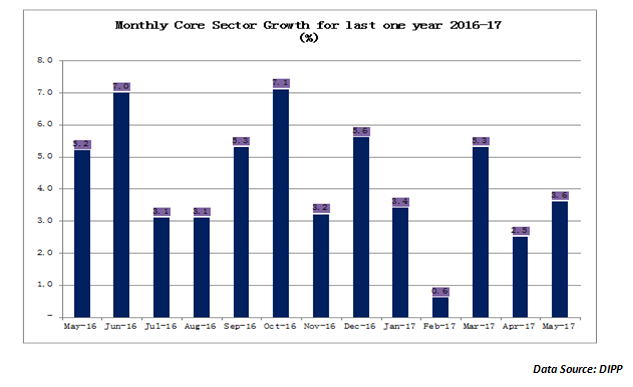 Core sector from a broader perspective…

Which sectors put pressure on the overall core sector growth?

For the month of May, coal sector grew by just 0.7%. India’s coal policy is still crystallizing and there is too much dependence on one single company. Hopefully, with clearer policy movement, this sector should show better performance in the coming months. Fertilizers are another space that disappointed with negative growth of -6.5%. The industry has been waiting for clear policy guidelines with respect to this space and hopefully it should come through in the forthcoming Union Budget. This segment has been a major drag on the overall core sector growth. Lastly, steel disappointed through lower growth during the month. The May growth of 3.7% in steel was much lower than the growth seen in the last few months. Steel has been one of the big beneficiaries of favourable government policy. The last one year seen positive traction in this segment and the core sector will be looking at government initiatives to give a further prop. However, a visible pick-up in demand will also be critical for the success of the steel sector.

Interestingly, energy was the major booster for core sector growth during the month of May. Both oil and electricity saw some positive traction during the month of May. Crude oil production rose by 0.7%, which is higher than previous months. The boost has come from stable prices, albeit on a lower plane. We can expect more traction from this sector due to a more favourable hydrocarbons policy and the initiative to bring more land under oil prospecting. Natural gas was the surprise package with a growth of 4.5%, clearly better than previous months. The new pricing formula has been an incentive and as usage picks up, we could more traction from this sector. The higher throughput from oil was also evident in the 5.4% growth registered by the refining business. Healthy refining margins and more refining capacity coming on stream have been responsible for this performance. The real positive was the boost to electricity which came back to 6.4% growth as coal supplies stabilized.

The core sector growth, to be meaningful, needs to be looked at from a slightly longer term perspective. The full year core sector growth of 4.8% for 2016.17 is one of the best performances in the last 5 years. With the benefits of remonetization starting to kick in, the salutary impact of GST implementation and the more favourable government policy; we can look forward to better traction on the overall growth front. That could be the key take-away from the numbers!