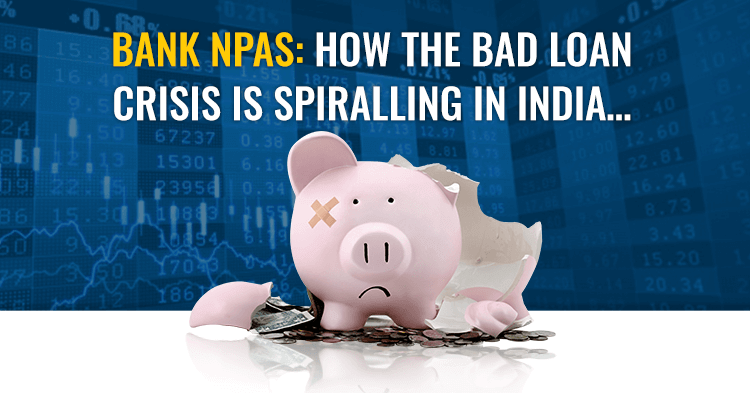 According to recent figures put out by the RBI, the Gross non-performing assets (NPAs) of the Indian banks had crossed the Rs.8,50,000 crore mark. It would not be inappropriate to say that the NPA problem continues to be the biggest overhang on credit growth and banking sector health in India. Banking NPAs have risen for a variety of reasons. There were bad credit decisions, poor monitoring, laxity in vigilance, connivance of bank employees, poor understanding of project costs as well as routine business downturns. The moral of the story is that most NPAs evolved when the Indian industry went on a borrowing binge in the decade post-2003 and the overhang of those actions is still being felt. But first, how bad is the NPA problem in India?

How Gross NPAs of the banking system have grown… 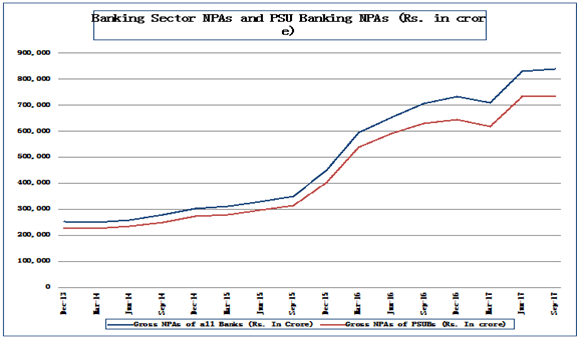 As the above chart evidences, the public sector banks (PSBs) account for 85 to 90% of the total banking sector NPAs. In fact, if you look at the top 20 banks with the highest level of NPAs, 18 out of them are PSBs. While some private banks like J&K Bank, ICICI Bank and Axis Bank have relatively higher level of NPAs, it is PSBs that are the biggest contributors. In fact, the situation of NPAs in some of the PSBs is almost unsustainable. Consider the chart below… 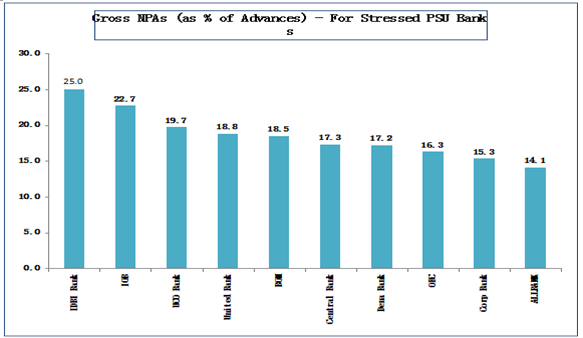 As can be seen from the above chart, the NPA levels in select PSBs have really touched unsustainable levels and most of these banks have already been referred to prompt corrective action (which we shall see in detail later). But first what caused this mountain of NPAs in the first place?

What caused this mountain of NPAs in the first place?

CDR, SDR, S4A and why they failed to address the NPA issue satisfactorily…

The first attempt by the RBI to address the NPA crisis was in 2001 when the Corporate Debt Restructuring (CDR) scheme was first launched. The CDR enables the banks and lenders to voluntarily agree upon more favourable terms like reduction of interest, extension of loan period, temporary moratorium on payments etc. However, the CDR was not too successful in addressing the NPA problem. Later in 2015, the Strategic Debt Restructuring (SDR) was introduced by the RBI envisaging the transfer of shares of the company by promoters to the lenders to protect the interests of the banks. However, in most cases the market cap of the company itself was a fraction of the total debt and the scheme did not really make sense. In 2016, the RBI launched the Scheme for Sustained Structuring of Stressed Assets (S4A) to address the NPA issue. Under the S4A loans above Rs.500 crores where at least 50% of the debt was sustainable was to be considered. Unlike the SDR, there was no need to oust the existing management as long as it was not a case of wilful default.

What exactly is the Nirav Modi Fiasco?

The NIrav Modi case of cheating PNB will go down as one of the most flagrant instances of wilful default. The Nirav Modi owned Firestar International (a leading global diamond trader) had connived with officials of PNB at the Brady House branch in Mumbai to get fake letters of undertakings (LOUs) issued in their favour. Interestingly, these LOUs were issued without the bank insisting on any margin from the customer, which is unheard of. The officials of PNB had connived with the Nirav Modi group to share the SWIFT password to facilitate transmitting these fake LOUs. SWIFT is the global protocol for transferring money and key documents across banks in different countries.

Based on these LOUs, the international branches of banks like Axis Bank, SBI and Allahabad Bank gave loans to the Nirav Modi Group, which eventually became irrecoverable when Nirav Modi defaulted on these loans. The RBI has already clarified that PNB will have to make the provision of Rs.12,700 crore in this case. But the big question still remains as to how the bank will recover the money from Nirav Modi. More importantly, can India allow such unscrupulous promoters to cock a snoop at the Indian banking system and run away?