The last time that the Chinese economy was downgraded by a rating agency was nearly 3 decades back in 1989. That was in the immediate aftermath of the Tiananmen Square massacre where the Red Army had rolled its tanks over a student protest resulting in the death of 10,000 students. Since the early 1990s, China embarked on an aggressive reforms program, creating massive capacities in almost all sectors and virtually becoming the manufacturing capital for the world. China’s annual GDP at $12 trillion is next only to the US. However, this growth has come at a price and that price is beginning to gradually manifest. This rating downgrade by Moody’s by one notch from “AA3 to A1” is, perhaps, an acknowledgement of the harsh reality that the problems in China could be much bigger than what the world would like to believe.

Back in 2016, Moody’s had warned of a likely downgrade of China’s sovereign rating and had already changed its outlook to “Negative”. Normally, this is an indication of a possible downgrade if the government does not take urgent measures to rectify the situation. China’s GDP growth has faltered to below the 7% mark and most independent analysts even doubt the veracity of these numbers and peg the actual growth at as low as 5%. The debt of the Chinese government as well as of Chinese households has been on a constant rise and that is making the economy extremely vulnerable. Above all, there is a huge shadow banking industry that has proliferated in China outside the ambit of banking regulations. Let us first look at some of the macros…

Debt is increasing to dangerous levels… 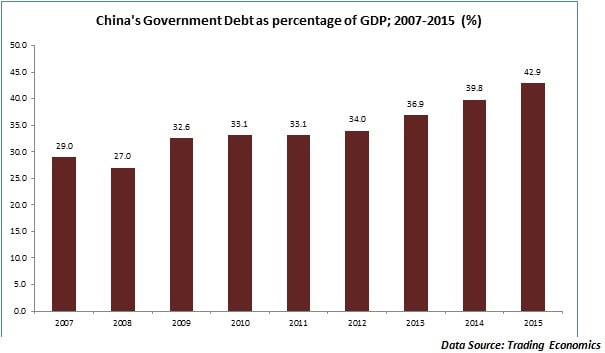 As the chart above indicates, the government debt has been on a consistent rise since the financial crisis of 2008. The government has undertaken a massive expansion program by investing heavily in infrastructure and to increase capacity across most of the industries. The result is that much of the infrastructure created by China is not being optimally utilized since China accounts for nearly 50% of the capacity in most metals. This has created a pressure on employment and growth in China. 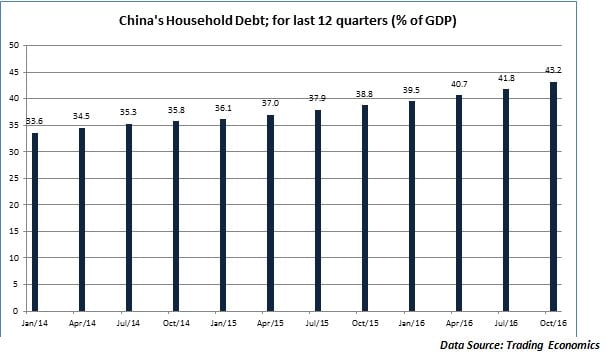 GDP growth has been faltering in China…

The chart above clearly captures the sharp fall in Chinese GDP growth. Since China began its massive capitalist push in the early nineties, real GDP growth has consistently remained in the 9-10% range. In the last 4 years, the GDP has fallen sharply from around 8.5% to the 6.6% levels. In fact, most of the independent analysts do not give much credence to these estimates and project the actual growth to be in the 5-6% range. For 25 years, the China growth story was built on manufacturing and massive capacities were created to become export hubs for the world. That strategy worked till the time the global slowdown left China holding on to a surfeit of capacity in almost all sectors. That forced China to shift its strategy towards a more domestic consumption-driven approach rather than trying to focus on manufacturing for exports. Obviously, that shift is not going to be easy and it is also going to be prolonged. Till that time the transition is completed, GDP growth in China will remain at subdued levels.

What could be the implications of the China downgrade?