To understand the end of the end of the Trump Rally, one needs to first understand what the Trump rally was all about. When Trump was voted to power in November 2016, it raised hopes that Trump would live up to his promises of cutting individual and corporate taxes as well as investing $1 trillion in infrastructure. These two factors combined were expected to trigger a virtuous cycle of higher incomes, higher consumption and higher growth in the US. Being a bellwether economy, the benefits to the US economy were expected to rub off on other economies like India. The chart below captures the movement of the Dow Jones Index and the Nifty over the last 1 year, with the movement since November being specifically highlighted… 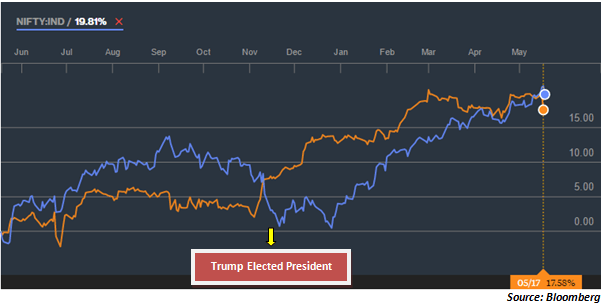 Since November 09th when Donald Trump was officially elected the US President, the Dow Jones and the Nifty have almost moved in tandem. Since both the charts are to the base of 100, the comparison is much clearer. While the Nifty has given a return of 19.81% since Trump won the Presidency, the Dow has returned 17.58%. This was the global asset price rally that was largely driven on the back of hopes that Trump will make a substantive difference to the US economy and in the process, the rub-off effects will be felt across the world’s key economies.

So what exactly has gone wrong with the Trump story?

In fact, quite a few things have gone totally awry and the initially sheen surround the Trump presidency appears to be gradually wearing thin. Consider the following instances…

What happens from here; can the POTUS be impeached?

Remember impeachment marks the start of the investigation proceedings against the president. An impeachment does not automatically lead to the removal of the president. In the past, impeachment proceedings were initiated against 3 previous US presidents viz. Andrew Johnson, Richard Nixon and Bill Clinton. Both Andrew Johnson and Bill Clinton were exonerated of the charges and allowed to complete the term of their presidency. However, Richard Nixon voluntarily resigned following the Watergate Scandal. Hence, there is historically no evidence of a US president being removed from office after initiating impeachment proceedings. Even markets are betting that while impeachment proceedings are likely, removal does look quite unlikely. However, it would mean that a lot of reforms proposed by Trump will be put on the back-burner. That is enough to disappoint markets.

What does that mean for Indian markets?

While Indian markets are likely to face some temporary disruptions, long term damage to Indian market is highly unlikely. In fact, the entire imbroglio may force Trump to become a little more measured on his ultra-aggressive stance with respect to foreign businesses operating in the US. That should be a major positive for Indian companies. Additionally, Indian economy is not overly dependent on the US economy and the domestic demand drivers are likely to remain intact. In fact, the temporary correction that the markets may offer in India would be an opportunity for investors to meaningfully restructure their portfolio. This can include adding on to quality stocks and booking out from froth.

The entire Trump story may be a case of “Much ado about nothing”, at least from India’s perspective. The markets will be more worried about the reversal of the reform expectations and that could temporarily prove to be a glitch. In the slightly longer term, nothing really changes for Indian markets!