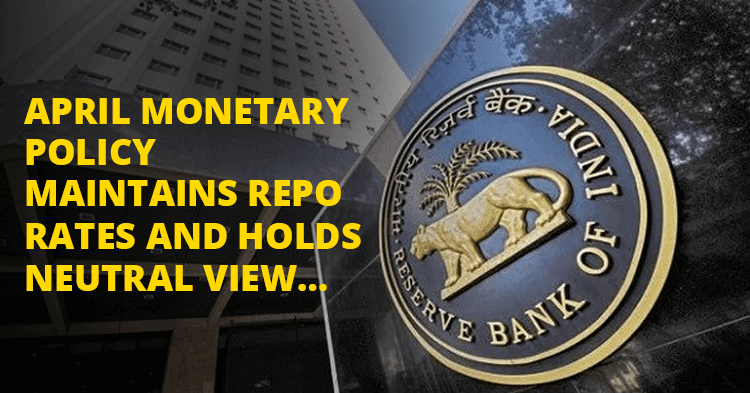 The monetary policy announced by the MPC on April 05th had little by way of surprises. There was almost a consensus among the bond traders and the fund managers that the RBI would hold the repo rates at 6%. What was of greatest interest was their inflation outlook and monetary policy stance! The following are the key highlights of the monetary policy

What about inflation trajectory in the MPC?

One of the concerns expressed in the monetary policy was of the trajectory of inflation. The MPC has voted 5:1 in favour of a status quo on rates with Dr. Michael Patra voting for a hike in the repo rates by 25 basis points considering the uncertainty over inflation. Inflation for the fiscal year 2018-19 has been estimated at around 5.1% in the first half and at lower levels of 4.5% in the second half. However, the monetary policy statement itself has admitted to some open upside risks to inflation. Firstly, the MPC has noted that the revised formula for calculation of Minimum Support Price (MSP) for Kharif crops at 150% of cost of production could be inflationary depending on what all gets included in the cost of production. Secondly, the MPC also sees risks to inflation emanating from the fiscal slippages by the centre and, more importantly, the states. The fall in inflation in the last 3 months as captured in the chart below may, therefore, not be entirely indicative of the future trajectory of inflation

Thirdly, most of the states are going to implement the payment of HRA in a staggered manner. This could have a staggered impact on inflation, which may not be captured in the inflation chart of the last few months. Finally, the twin risks of a weak monsoon and global crude oil prices are entirely beyond the control of the government. With consistent supply disruptions across Libya, Venezuela and Angola, the rise in crude remains the big threat to inflation expectations in the future.

Growth in IIP has been showing some Greenshoots of recovery…

While the IIP data comes with a 1-month lag after the inflation data, there is a clear sign of pick-up in industrial activity in the last few months. Quarterly results have shown the first signs of a revival in the third quarter of 2017-18 and that trend is expected to be sustained in the fourth quarter too. Some specific lead indicators within IIP like capital goods, machinery demand, core sector growth, PMI manufacturing and CV sales are showing sharp growth. These are indicative of improved growth in IIP in the coming months, accompanied by a pick-up in exports. With the revival in the IIP on auto mode, the MPC does not see the necessity to propel growth in production through lower interest rates. That was largely achieved in the aftermath of demonetization. With inflation still in uncharted territory and industrial production almost on auto mode, the MPC did not see any urgent need for rate cuts, although rate hikes will have to be deliberated and calibrated at a future date.

The one message that came out from the monetary policy was that while the MPC did not see the reason for a rate hike, it is likely to be cautious on the rate hike too. There are actually aspects to a rate hike and markets have been talking about a possible 25-50 basis points rate hike during the current year. Here are two perspectives to a rate hike by the RBI…

Firstly, the positive side is that a rate hike will widen the yield differential between the US 10-year benchmark and India 10-year benchmark. This will be positive for FPI flows into Indian bonds and if the government also simultaneously hikes the FDI debt limits then it can comfortably manage its borrowing targets.

Secondly, there is a risk of rising bond yields due to a rate hike. In fact, between July 2017 and March 2018, the 10-year bond yields actually went up by 138 basis points from 6.40% to 7.78% on the back of inflation expectations and in sympathy with global bond yields. However, in the last 1 week, the 10-year bond yields have fallen sharply for 2 reasons. The yields fell due to a combination of a lower H1 borrowing program of the government and subsequently due to the neutral stance of the monetary policy. In the last 10 days, the bond yields are down by almost 60 basis points which are proving to be a major relief for banks and debt funds. They will now have to provide less towards MTM losses on bonds.

Even if the RBI wants to cut rates to spur growth, that is going to be difficult if inflation picks up more than expected. US Fed rates will also be an overhang. A rate hike may be positive for rate differential but could lead to price destruction in bonds. In fact, bond market liquidity has sapped in the last couple of months and that will make it difficult for the government to meet its borrowing targets. We will have to wait for the MPC minutes on 19th April to gauge the future course of how the RBI handles this dilemma.