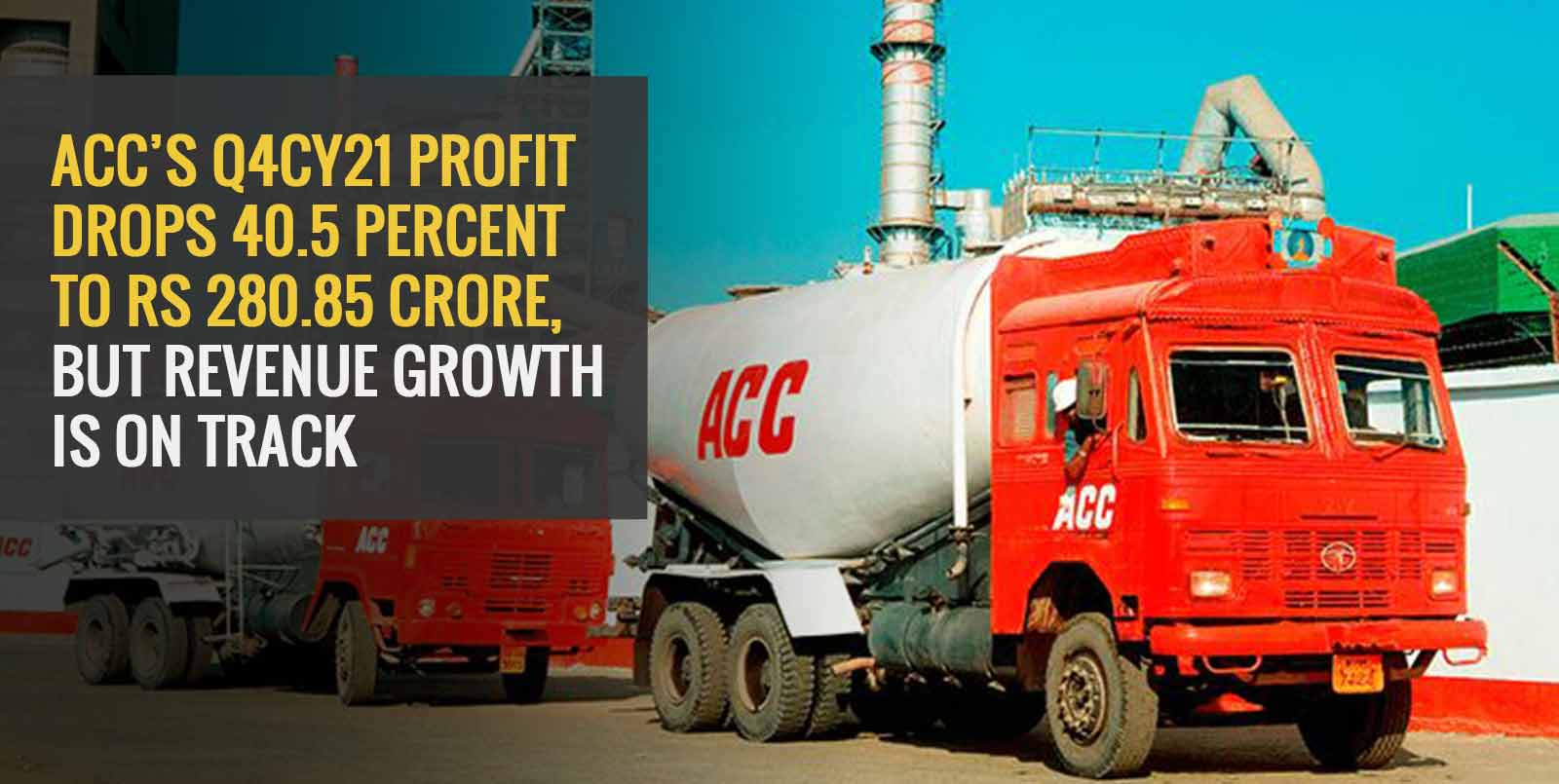 In the previous fiscal year, the consolidated profit was Rs 472.44 crore. The business stated in a BSE filing that consolidated revenue from operations increased by 2% year on year to Rs 4,225.76 crore in the October-December 2021 quarter, surpassing analysts’ forecasts.

“On many levels, the year 2021 was difficult. Major supply chain disruptions wreaked havoc on the global economy, resulting in severe inflation, fueled mostly by rising gasoline prices. Cement demand was also down in the third quarter, owing to a variety of regional variables throughout India,” ACC said.

In terms of operations, EBITDA dipped 2.7 percent to Rs 556.3 crore in the December quarter, and the margin plummeted 64 basis points year on year to 13.16 percent. Except for sales, the numbers fell short of analysts’ expectations. According to sources, profit was predicted to be Rs 440 crore on sales of Rs 4,220 crore, and EBITDA was expected to be Rs 696 crore with a margin of 16.5 percent for the quarter.

In comparison to the previous year, consolidated profit increased by 30.3 percent to Rs 1,863.10 crore, while revenue increased by 17.16 percent to Rs 16,151.67 crore. “In CY21, we achieved a 17 percent increase in revenue and a 40 percent increase in EBIT. Project ‘Parvat’ efficiency improvements, together with product premiumization activities, has allowed for inflationary pressures to be mitigated and profits to be expanded,” ACC said.

After Finance Minister Nirmala Sitharaman dramatically boosted the budget on capital investment for 2022-23 in the Union Budget announced on February 1, cement and infrastructure equities were in high demand.

Analysts anticipated the government to increase capital spending by 20%, but Budget 2022 increased it by 35%. Because of increased government project bidding activity, the huge capex spend is considered as a significant benefit for infrastructure businesses, since it will raise their order books in the future. The increased expenditure on public investment and affordable housing also helped cement businesses. Under the affordable housing initiative, the government has set out Rs 48,000 crore for housing projects.

Q1. What is the significance of the cement business in society?

The industry educates workers not just to fulfil home needs, but also to meet the demands of international markets. Cement has long been seen as a gauge of growth in emerging countries, and it is appropriately regarded as a key indicator of economic activity.

Q2. What is the state of India’s cement industry?

Q3. What is the importance of the cement industry?

The cement sector adds to the Gross Domestic Product (GDP), provides work for thousands of people, and generates significant tax money for the government.