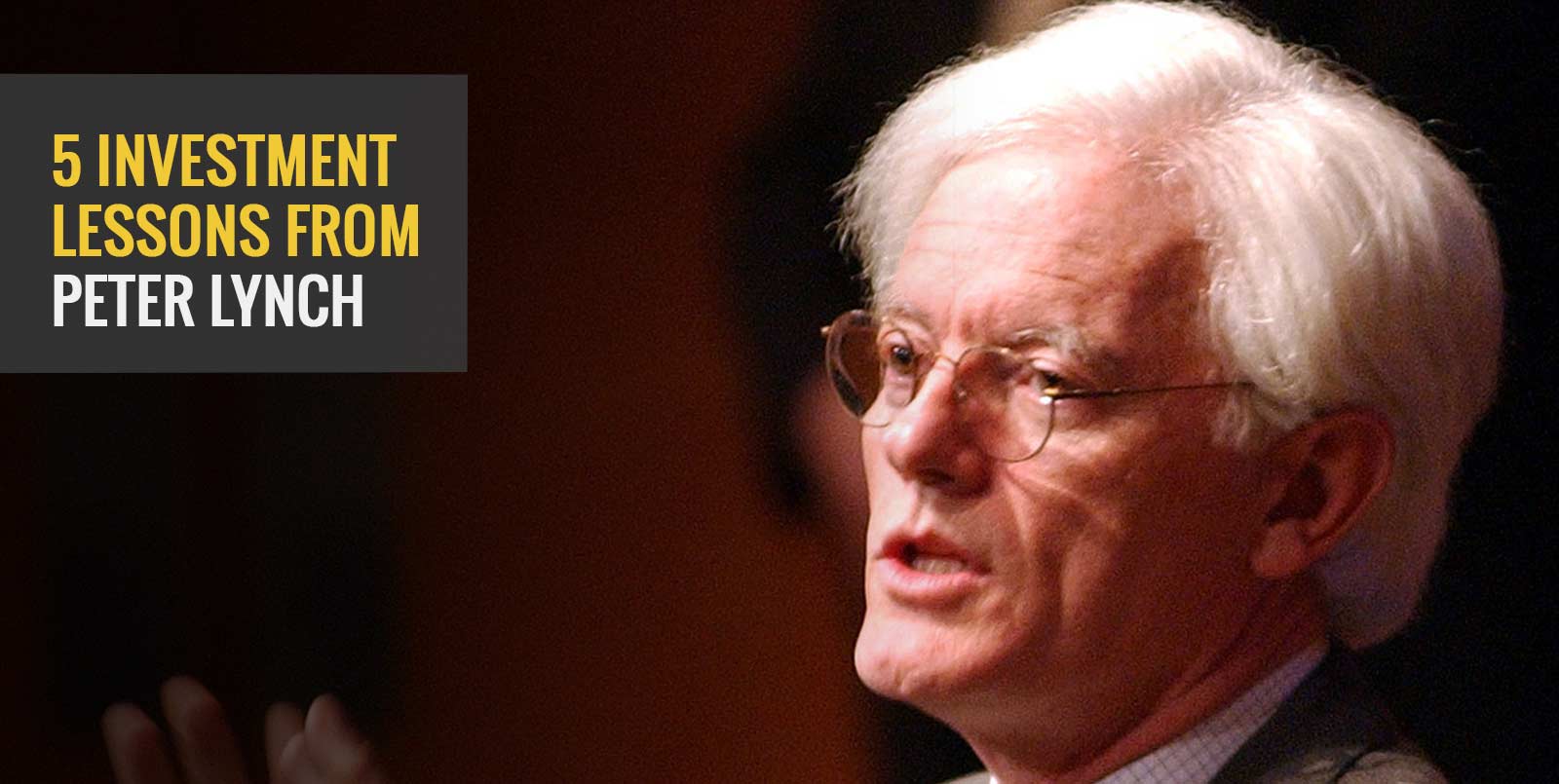 Considered as one of the best investors, Peter Lynch, the chairman of Lynch federation is a mutual fund manager and a philanthropist. During the 13 years between 1977 and 1990 when he ran the Fidelity Magellan Fund, he outperformed the US market index S&P 500 by almost two times in 11 out of 13 years averaging over 29% Average Annual Return (ARR).

The Magellan mutual fund had $20 million in Assets Under Management (AUM) in 1977 when Lynch became the manager of the fund and it went on to become a $13 billion fund, the world’s largest mutual fund at that time.

Luckily, Lynch has not kept his secrets of investing to himself and expressed them in his several well-regarded books like ‘One Up on Wall Street’, ‘Beating the Street’, and ‘Learn to Earn’ which have inspired and helped many to earn outstanding returns.

Lynch’s investment philosophy is simple not only to understand but also to apply. Here are five of the many investment lessons in the form of wisdom from the man himself:

1. “In the stock market, the most important organ is the stomach. It’s not the brain.”

The volatility that the market experienced in the last year since the rise of COVID-19 pandemic has made clear what Peter Lynch was saying in this quote. People who expect a market free of volatility and have no stomach for it should invest elsewhere to build long term wealth.

Lynch says that a person has to look in the mirror every day and ask themselves what will they do if the market goes down by 20%, will they sell the stock and get out?. If the answer to the question is affirmative, then the investor should consider reducing their stock holdings immediately.

Lynch says that an investor should make a decision with their brain and have the stomach to stand by it as decisions taken based on emotions can be a real performance killer which will lead you to sell stocks in panic when market goes down and buy up overvalued stocks in case the market goes up.

2. “Never invest in any idea you can’t illustrate with a crayon.”

The basic notion behind this idea is to know what you own and why you own it. Be it any market of stocks, futures & options, or cryptocurrencies, people more often than not fall for ‘hot tips’ that promise to make you rich in a short period of time.

An investor is likely to avoid taking any impulsive decisions if they are confident about the company in which they are investing in.

3. “Predicting the stock market is a total waste of time.”

This quote is very relevant as we saw in April 2020 when the global financial markets took a free fall as a result of the COVID-19 pandemic and every prediction made by the experts and every technical analysis failed as an unprecedented event occurred that affected all the countries in the world.

The economies of the individual countries are subject to several events occurring within and outside the country and many of them are unpredictable. As Lynch says, nobody predicted that the worst recession since the depression was going to hit in 1982 where there would be 14% inflation, 12% unemployment, and 20% prime rate.

Hence, the investor should not worry about the stuff that they cannot control but focus on the fundamentals of the company that they have invested in. If the company has a good foundation, it is more likely to perform relatively well even in unexpected scenarios.

4. “You have plenty of time, people are in an unbelievable rush to buy a stock.”

As rightly pointed out by Lynch, stocks are not lottery tickets. He highlights a simple principle that a good company will provide good returns and bad companies will not provide good returns. An investor can still make multiple times his investment in returns even if he buys a stock a few years later than its IPO.

Investors should not rush to buy a stock of a company unless they are confident in the company and the returns it could provide to the investor.

In recent times, with the advent of social media, there is an element of FOMO (Fear of Missing Out) while investing which has become an important factor for investing decisions of many investors.

This can be witnessed especially in cryptocurrency markets where it is seen that people put a considerable amount of their life savings in a cryptocurrency based on tweets and online discussions.

5. “You don’t have to “kiss all the girls.” I’ve missed my share of ten baggers, and it hasn’t kept me from beating the market.”

Many investors choose stocks based on previous year’s performance and make changes to their portfolio accordingly. This makes the portfolio messy and it often becomes counterproductive to the goal of wealth creation.

Instead of chasing the top performing stocks or funds in the market in the short term, the investor should identify and invest in good stocks that they believe will yield outstanding returns over the long term.

“Although I have missed some supermodel stocks, I have kissed some pretty stocks in my career too. I wish I could have invested in more stocks that increased multifold, but this has not hurt my long-term performance.”

Lynch’s principles and the philosophy of investing were simple just like all successful investors, he stayed within his zone of understanding, and avoided the influence of emotions to affect his investing decisions to give returns which many are not able to deliver even today with all the fancy tools available.

Disclaimer – The article is only for educational purposes and all the information given in the articles is available in the public domain.