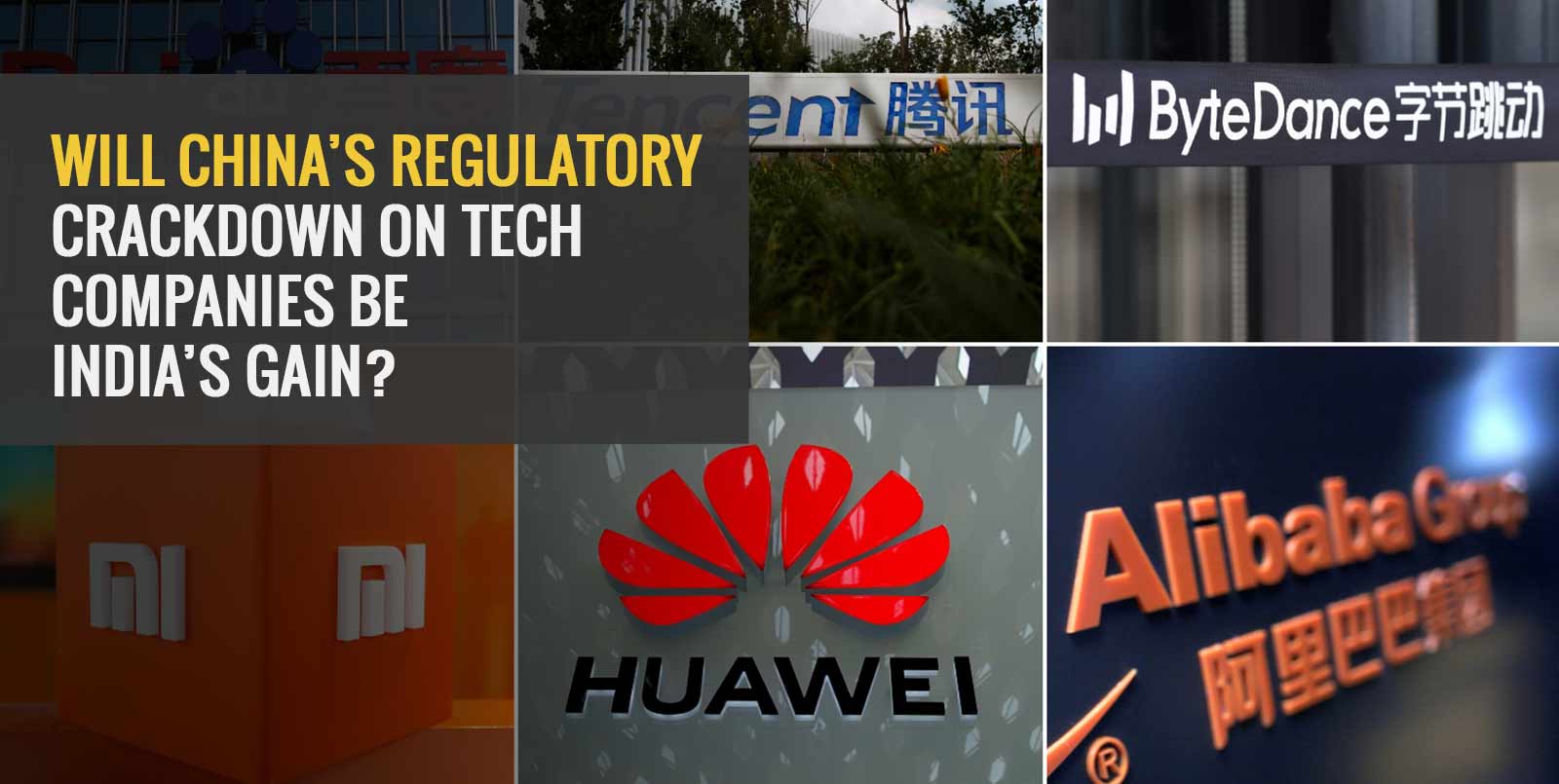 The recent crackdown by China on tech companies may likely be advantageous to India as global wealth and funding may come India’s way. With new regulatory frameworks, Chinese tech stocks have collectively seen an erosion of $1.5 trillion. During the August 14-21 week, over $560 billion worth of market value was reportedly erased from the China and Hong Kong exchanges.

The ongoing clampdown has affected a series of startups, including edtech platforms in China. Chinese firms that tutor online on subjects that are taught in school can reportedly no longer receive foreign investment, according to the new regulatory framework. Also, listed companies in China, reports say, can no longer raise funding through the stock markets to invest in businesses that take up school/classroom subjects for teaching. Further crackdowns have been reported on food delivery platforms, apps streaming music, gaming and bike sharing apps. Public listings of some companies such as Ant Financial and ride-hailing app Didi were put off owing to reviews by the regulators in China.

China has also passed the Personal Information Protection Law, which will be brought into implementation from November 1. The law pertains to rules about enhanced storage of user information and data and conditions according to which firms can gather data. These rules are aimed at protecting data of citizens when such data is moved outside China.

What does it mean for India?

With China being the bigger venture funding recipient than India, any regulatory bottleneck or ban in that country is likely to now benefit India, experts observe. According to data cited in news reports, the value of deals (VC) increased to $7.9 billion in India for the month of July. On the other hand, investments in Chinese firms dropped to under $5 billion.

The China edtech startup market (K-12 grades) is reported to be worth $31 billion, and is reported to be the world’s biggest such edtech market. With the Chinese government cracking the whip on this market and reframing rules, India, which is seeing a growth in the edtech market following the pandemic and the rise of online education is likely to benefit. The Indian edtech startup world has raised $1.9 billion between January and early August alone, reports note. In the whole of 2020, the Indian edtech startups had raised $2.2 billion.

India is already the world’s third largest market for startups after the United States and China. As many as 25 fresh unicorns have raised their heads in India thus far in 2021, and over $20.75 billion has been raised in deals between January and August 20, 2021. In 2020, 12 firms had turned unicorns and a little over $11 billion was invested in startups in India. Unicorns are companies that are valued at more than $1 billion.

Indian startups, according to news reports, have in the first six months of the calendar year 2021, raised more than $12 billion from private equity (PE) firms and venture capitalists. The high valuations and the increased fundraising has been driven by a huge liquidity surge. Investors, experts note, have entered at even two-fold valuations because the chances of an exit led by IPOs at bigger valuations are turning real. The food delivery startup Zomato’s IPO listing in July has triggered this rush, according to observers.

The IPO boom is further expected to drive greater PE and VC funding to Indian startups, as the startup ecosystem may require both private/VC funding and IPOs to grow. The stock market in India has seen more than 40 IPO listings in 2021; as of August 20, 23 firms have filed their initial documents with SEBI. These include many tech startups such as online insurance marketplace Policybazaar and online cosmetics and beauty products platform Nykaa.

The crackdown by the Chinese government on tech companies, following a series of new regulations, has already eroded $1.5 trillion from tech stocks. This crackdown is expected to benefit the Indian startup ecosystem, which has been experiencing an IPO and VC/PE funding boost this year.

Where does India stand in the global startup ecosystem?

India is the world’s third biggest startup ecosystem, after the United States and China.