During the week, the Tatas have called a special meeting on September 21st to consider converting Tata Sons from a Public Limited company into a Private Limited Company. This decision needs to be seen in the light of the recent differences that cropped up between the Tatas and the Mistry family leading to the eventual ouster of Cyrus Mistry from the post of CEO of Tata Sons.

From Private to public and back to private!

Ownership is still a grey area in Tata Sons…

The Indian Companies Act specifically precludes holding company ownership through trusts. The government had consciously made some exceptions in case of businesses that were in existence even before the time India became independent. That is how the Tatas have continued their control of Tata Sons through the trusts. There are 2 grey areas here. According to the Mistry family, their stake in Tata Sons is to the tune of 18.4%, which makes them a very significant minority shareholder. However, the contention of the Tatas is that one also needs to consider the potential dilution from subsequent the issue preference shares. According to the Tatas, if the dilution due to preference share issues is also considered then the ownership of the Mistry family could be as low as 2.5% in Tata Sons. Secondly, Tatas may personally be smaller owners in Tata Sons but the majority ownership still rests with Tata Trusts where Ratan Tata remains the principal stake holder. This already gives an advantage to the Tatas in dealing with the Mistry family in the Tata Sons affair.

Can the Tatas push this proposal through?

To understand whether this proposal to convert Tata Sons into a private limited company can be pushed through, one needs to understand the ownership structure of Tata Sons… 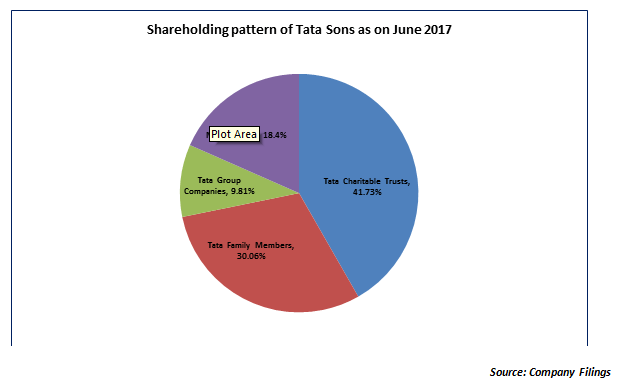 Effectively, the Tata Family owns 81.6% of Tata Sons as per the company filings. If the subsequent preference dilution is considered then their effective stake must be much higher. However, that is not too clear at this point of time. The resolution to convert the company back to private requires the approval vote of 75% of the shareholders, which is something the Tata Group should be able to manage considering their control over nearly 81.6% of the voting power in Tata Sons. The other challenge is the NCLT approval which is also required before converting Tata Sons back into a private limited company. We need to understand why the NCLT becomes very important in this case.

The Tatas have set the ball rolling. How the Mistry family and the NCLT react will decide the future course of events.