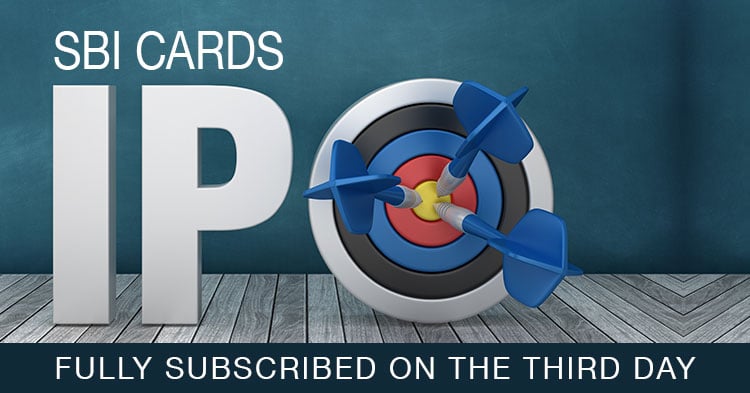 SBI Cards is the largest issuer of credit cards in India. Credit card expenditures in India grew by 32% each year to a whopping ₹6.1 trillion between 2016 and 2020. Given its dominant position within the domestic market for credit cards with a strong parent company keeping tabs on it, SBI Cards is in an advantageous spot as the trend of digital payments continues to rise. Investors with a long term horizon are latching on to considering SBI Cards IPO, as well as those with the desire for exposure to growing consumerism.

On Monday, SBI Cards issued a bidding announcement with the expectation to raise around ₹10,355 crores through its IPO. SBI Cards IPO price-range has been fixed at a lower limit of ₹750 and an upper limit of ₹755 for every share. Since its bidding announcement on Monday, the buzz for SCI Cards IPO grew so intense that, within 3 days, it was fully subscribed and then massively oversubscribed.

Traders estimated that the issue would be impacted by the equity market’s seven-day losing streak. This was said to be driven by fears of coronavirus reaching Delhi, the national capital. In fact, the offering at a slow pace with a mere 39% subscription filling up by the end of the first day of the issue. However, within the next 24 hours, SBI Card’s IPO observed major growth in booking reaching 87% subscriptions on Tuesday with the employee and retail portion fully booked.

On Wednesday, the 4th of March, the qualified institutional buyer’s portion was subscribed by ₹1.04 lakh crores. Against the shares on offer, the SBI Cards IPO issue saw overall bids for 155 crore shares. This meant that SBI Cards issue was oversubscribed by 57.18 times more than what was anticipated. Price to earnings (PE) for SBI Cards is 45.5 times the share price while the price to book (P/B)14.5 times. Yet, since it has no listed peers in the country, SBI Cards IPO has been a success in India. Data from the NSE has revealed which portions of investors oversubscribed and undersubscribed to SBI Cards IPO.

Qualified Institutional Buyers comprised a certain portion of the SBI Cards IPO. They subscribed 3.47 times more than the expected amount. The portion that was kept for non-institutional investors was subscribed at 0.20 times the expected amount. Finally, the portion of the IPO dedicated to retail investors was subscribed to 0.40 times the predetermined amount. Shareholders themselves saw a 3.5 times increase in the predetermined subscription. For Qualified Institutional Buyers, SBI Cards issue was set to close on 4th March, while for the other investors it was closing on 5th March.

When it comes to the SBI Cards IPO issue, the IPO was composed of a fresh issue of ₹500 crores. The offer for sale (OFS) was set at 13,05,26,798 shares. This included the anchor portion which was fixed at 3,66,69,589 shares. With the aid of 74 anchor investors, the company had raised ₹2,769 crores by March 4th alone. Bids can be made by investors for a minimum of 19 of SBI Card’s equity shares. The minimum amount necessary to place a bid is ₹12,920. From this minimum, bids can then be made only in multiples of 19.

Additionally, any retail investors who are simultaneously holding shares in the State Bank of India are eligible to apply for SBI Cards’ shares. They can do so in the shareholder and retail category. Initial allotment for an eligible SBI shareholder has an upper limit of ₹2 lakhs. The lead managers in book running of the SBI Cards issue are Axis Capital, Kotak Mahindra Capital Company, DSP Merrill Lynch, Capital Markets (India), HSBC Securities, SBI Capital Markets, and Nomura Financial Advisory and Securities (India).

When it comes to stakeholders, the major stakeholder is SBI, the parent company of SBI Cards, currently holding a 76% stake in the company. The remaining stake is held by the Carlyle Group. As per the SBI Cards’s ‘Draft Red Herring Prospectus’ (DRHP) which they have filed with the Security and Exchange Board of India, the proceeds the company has received as additional funds will be used as its growth capital.

In its IPO note, the company Phillips Capital said that, as per its FY21 and FY22 estimations, SBI Cards will trade at a price to earnings multiple of 38.4/30.3 for each share at its upper band. They further estimated that SBI Cards’ market capitalization will be between ₹70,400 to ₹70,900 crores by FY22. Finally, Phillips Capital approximates compound annual growth of 39% for SBI Cards over FY19–22.