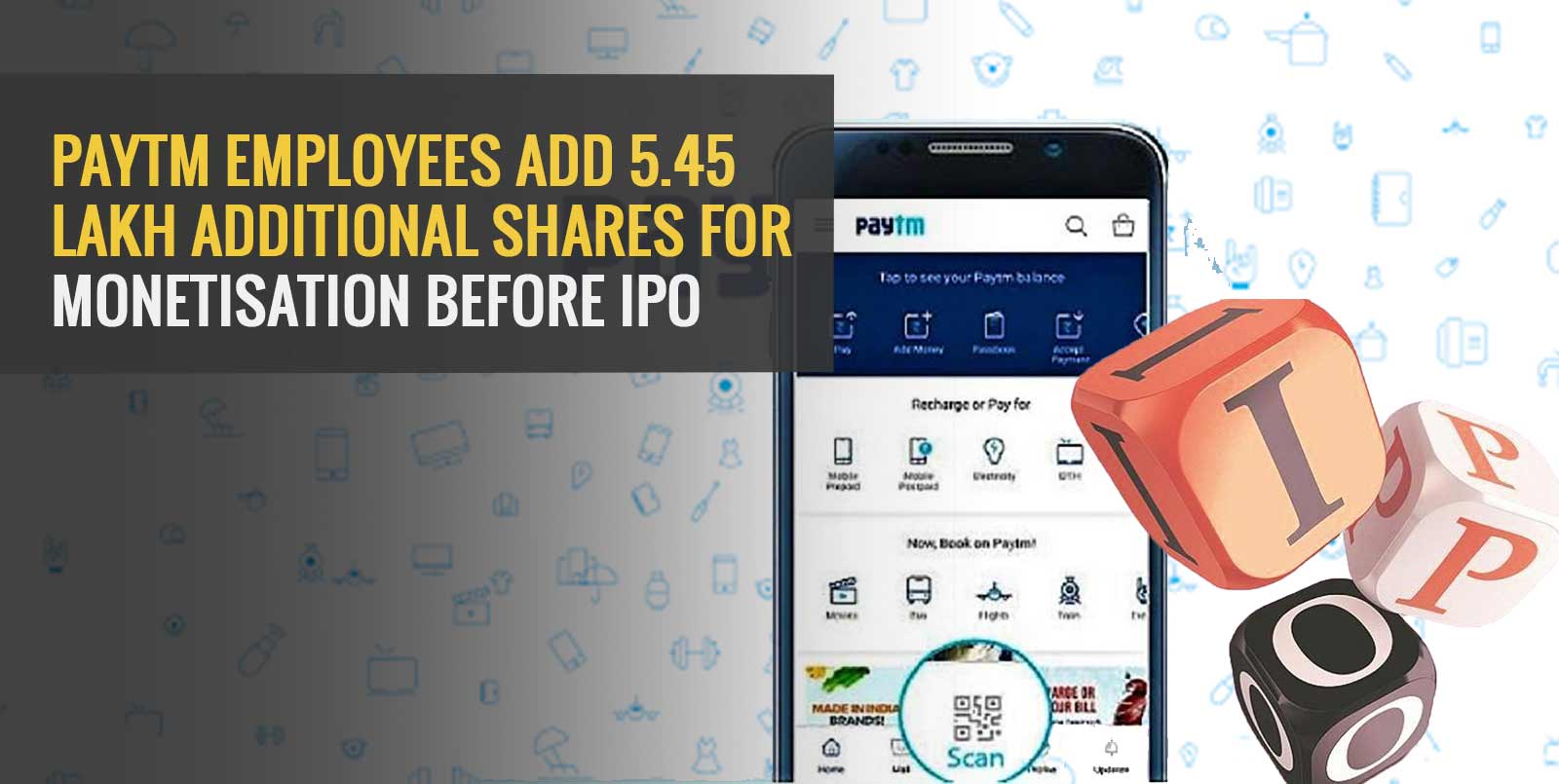 Digital payments firm Paytm has added another 5.45 lakh shares to its IPO through its employees. In a recent regulatory filing, One97 Communications mentioned that another 20 employees had converted their ESOP to a total of 5,45,735 shares for monetisation.

Previously, 200 former and current employees of Paytm have also gone down this route of converting their ESOP. Therefore, this new movement took the current tally to 220.

Moreover, Paytm received a notification from SEBI asking to complete this process by 22 September 2021. This will include important management personnel and selling stakeholders. However, for ‘designated individuals’, this deadline will be 27 September 2021.

Further, to help its employees complete this transaction Paytm is in talks with different financial institutions to arrange a loan of Rs. 100 crores. The aim here is to aid its employees to deal with tax payout during this transaction. This will be the difference between the price at which their ESOPs will be allotted and the final sale of these shares. Previously, Paytm announced that about 300 employees would come under this scheme.

Employee Stock Ownership Plan (ESOP) is a part of an employee benefit plan, where a company allows ownership stocks. Under this plan, a company allots a specific number of shares to its selected employees. Moreover, these shares remain in the ESOP trust fund until an employee decides to liquidate, retire, or leave the company.

As mentioned earlier, it is a part of the employee benefit plan. Also, this aims to improve a company’s performance and the valuation of its shares by including stockholders that are employees of that organisation. It also assists a company in reducing its issues related to incentives.

Here are two notable benefits of an ESOP plan –

With an ESOP, company shares remain within an organisation, and the information remains confidential. Hence, the company remains in control of its shares, and they can manage it better. Moreover, the company also remains in power to purchase these shares and allow its employees to earn a few extra bucks.

2. Easy to attract employees and retain them

ESOP comes with different terms regarding share ownership. For instance, if an employee stays for less than 2 years, he/she needs to forfeit these shares, whereas, if they stay more than that, they can take a percentage of their shares while leaving the firm.

Facilities like this allow companies to attract top talent in the market and retain them. In addition, ESOP offers an avenue for employees to increase their earnings, besides their stipulated salary.

Is It a Common Phenomenon?

Yes, it is a common phenomenon in the current equity market. Zomato can be a good example to refer to. During its IPO, employees converted their ESOPs into shares and made millions.

Apart from Zomato, Ola, Cred, PhonePe are some notable names that utilise this scheme to offer stock options to its employees.

ESOP can be an efficient tool for organisations to pool in and build a team of experienced individuals. Moreover, keeping Paytm’s current market position insight, this move can be fruitful for both the company and its employees.

To learn more about the Indian Stock market, and receive regular IPO news, stay subscribed to the Angel One Blogs.

According to reports, this IPO is likely to have an issue size of about Rs. 16,000 crores.

The timeline of Paytm IPO is not confirmed yet.

The price band of Paytm IPO is not confirmed yet.