The government has recently made it mandatory for all investments from India’s neighbours would need its approval before such plans, signalling a major shift in its foreign direct investment policy (FDI). The new rules for foreign investment in India applies to its neighbours, ie, countries that India shares borders with, including China, Pakistan, Bhutan, Nepal, Bangladesh, Afghanistan and Myanmar.

The new FDI rules in India have come in the wake of the coronavirus lockdown, and the financial implications of the pandemic. The FDI policy shift is to protect India’s interests and to ensure that foreign firms don’t make use of the current situation. However, what really triggered this move is the revelation on April 11 that People’s Bank of China (PBOC) had raised their stakes in India’s HDFC Ltd. The Chinese bank, which had thus far held 0.8 per cent, had upped its stake to 1.01 per cent. The new rules for foreign investment in India follows that of many EU countries like Germany and Spain. There have earlier been concerns of Chinese investment push in Italy as well. Australia too has adopted similar measures, announcing that all foreign investments would be under scrutiny.

China’s reaction to the new FDI rules in India has been that these barriers imposed by India are against WTO principles. China has also said India’s policy doesn’t conform to G20 consensus on creating a “stable trade and investment environment” and keeping markets open.

China claims that its overall investment in India has crossed US $8 billion, much more than the overall investments of other border-sharing nations of India, according to a statement by a spokesperson from the Chinese embassy in India (1). 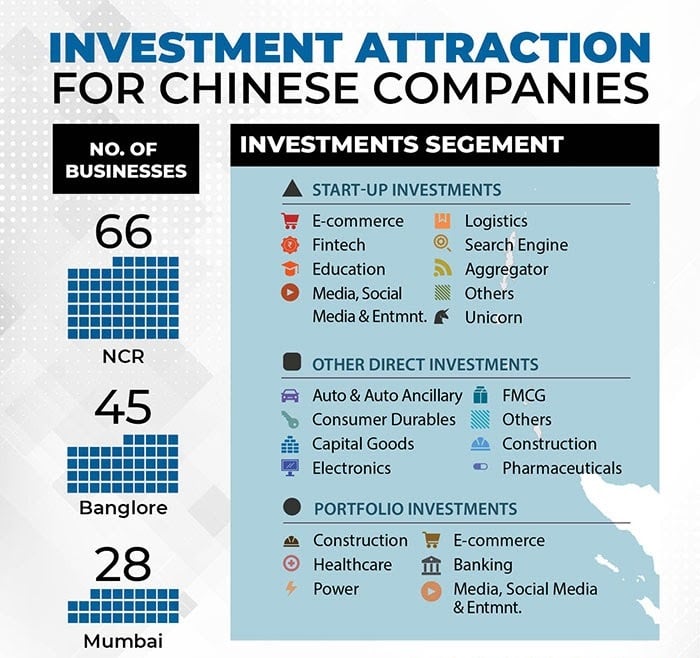 According to a widely cited report (3) from Gateway House (a foreign policy think tank), although Chinese investment in other countries like Bangladesh and Pakistan is in the physical infrastructure space, when it comes to India, funding from China has largely been to the country’s start-ups in the tech sector. The report notes that many Chinese funds and technology firms such as Alibaba, and Tencent, among others have funded as many as 92 start-ups in India. Many of these are unicorns like Byju’s, Ola, Oyo and Paytm. The report points out that as many as 18 out of 30 unicorns in India have Chinese investments involved. Also, the video app TikTok, which has 200 million subscribers in India is hugely popular, and has beaten YouTube too in terms of popularity. TikTok is a Chinese social networking service/app.

What’s more, the new foreign investment rules in India may make the country’s telcos more wary of sourcing 5G equipment from China. Any engagement with vendors from China may be avoided and major telcos may buy from other suppliers to minimise any kind of risk to their business or disruptions in supply. Both the major Chinese players, Huawei and ZTE, may have to face the heat in their India operations, owing to the new FDI rules in India.

In the light of so much Chinese investment interest in India, the new foreign investment rules in India will have some trade implications. It could be harder for Indian start-ups to raise funds. Also, the FDI move would be seen as a set-back to Indi-Chinese ties. There have been efforts between the two nations to boost relations in the recent past, with Chinese premier Xi Jinping visiting India to a rousing reception in 2019.

In conclusion, the new foreign investment rules in India are bound to open a new point of disagreement between India and China. India’s move is aimed to protect its interests and preempt any kind of opportunism on the part of Chinese in the wake of the Covid-19 pandemic. However, China may perceive this as a snub, as its statements have shown.

What is the impact of the new rules for foreign investment in India on individual stock investors or traders? World events definitely have a bearing on the markets but individual investors/traders should continue to focus on sectors and companies that have a good growth potential. Research of sectors, observing demand for certain products and services, and companies providing them may help. If you are an investor, all you need to do is open a demat and trading account with Angel One and you will receive investment tips and advisories. You can trade online or on the smartphone app to make the whole process seamless and efficient.