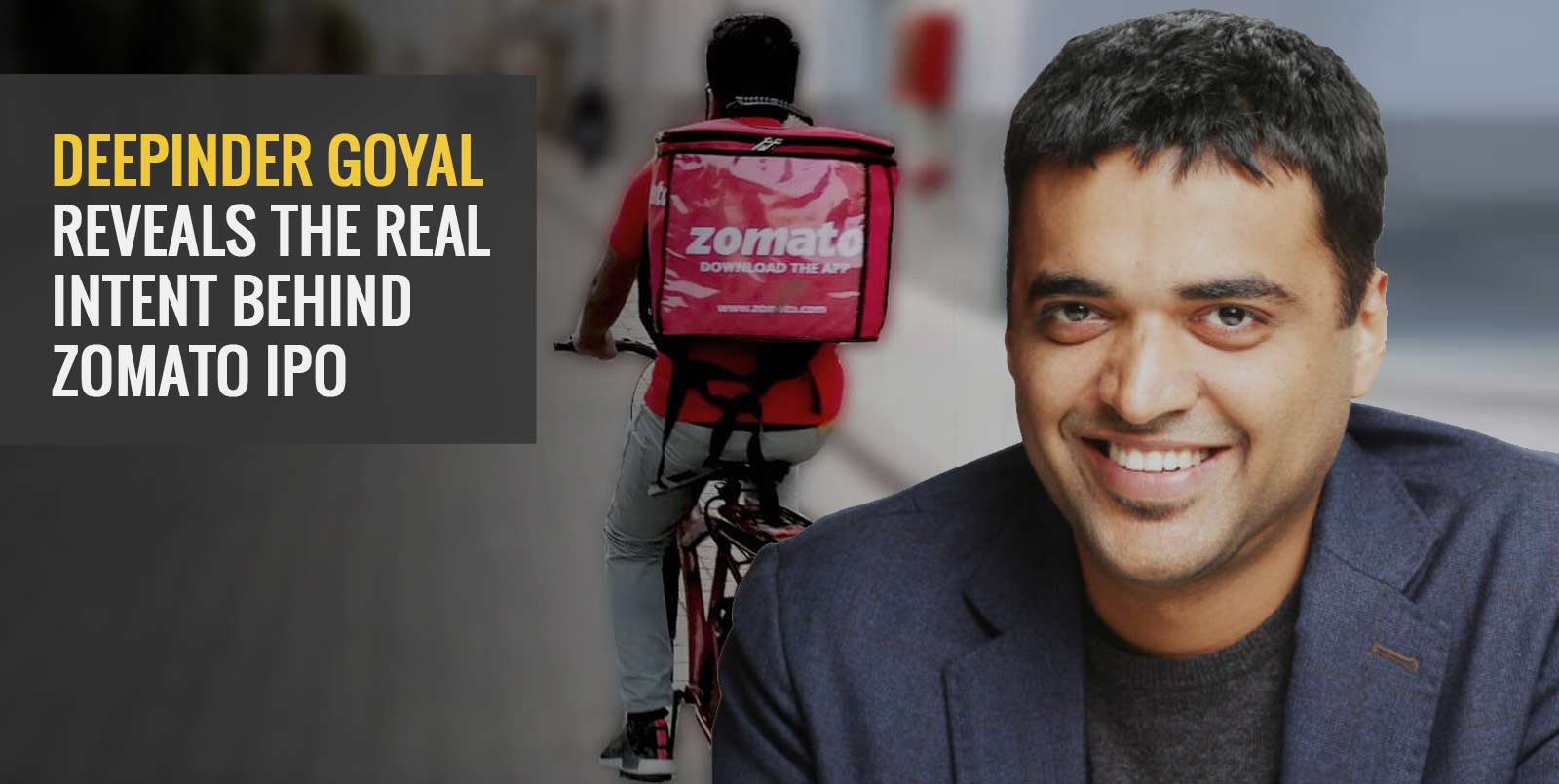 COVID-19 disrupted the food delivery industry and made it difficult for startups to raise capital, which had prompted Zomato to go public in 2020.

There was a point in time last year when the CEO of Zomato, Deepinder Goyal had made up his mind to go public even if it was only for $50 million, because of the lack of interest from private investors.

According to Goyal, he was told by Sanjeev Bikhchanani to leave enough money at the table to accommodate the public investors. He said that people who bought into an IPO should still be above water no matter what happens.

So why exactly did Zomato go for the IPO?

It wasn’t for any particular reason that Zomato decided to go for an IPO. Instead, it was because they needed to survive and fund their operations.

Goyal was prepared if the Zomato IPO was to get undersubscribed or even get listed at discount. Despite his expectations, the company’s impressive debut on the stock market was met with a positive response. The company had also put up for sale its entire stake in Zomato.

Post the success of Zomato’s issue, many other companies found the strength to come up with the offer. Nykaa’s initial public offer raised over five billion dollars through fresh issue and sale of existing shares. The issue consisted of a fresh issue of Rs. 63.90 crore and an offer for sale of Rs. 4,722 crores.

Another company, Policybazaar had planned to raise up to Rs. 3,750 crores through a fresh issue and an offer for sale of up to Rs. 1,960 crores.

Paytm’s initial public offering was the largest in the country in terms of size. It raised over Rs 8,000 crores through a fresh issue and an offer for sale of up to 10,000 crore shares.

What is Zomato up to?

Zomato, which was recently valued at $10 billion, has been aggressively scouting for organic growth. It has also invested in three startups, namely Shiprocket, Curefit, and Magicpin.

It also announced that it would invest $1 billion in startups in the next couple of years. This will be primarily focused on the quick commerce space.

In a secondary IPO, the goal is to get the most amount of money possible at the time of sale. These over-priced secondary IPOs are usually conducted for the long-term health of the company.

Commenting on the conflict of interest that led to the secondary IPOs, Goyal said that people should avoid investing in such overpriced secondary offerings. People always approach him saying that he had timed the offering of Zomato well. But the truth is, it took almost a year to prepare for the IPO, and back then, he did not know the condition of the market.

While he believes that fortune favors the brave, he also says that being stupid is a fine line between being brave and stupid.

How was the performance of the Zomato IPO since its listing?

The shares of Zomato got listed on the Bombay Stock Exchange at Rs. 115. Their issue price was Rs. 75. The Zomato shares were listed on 23rd July 2021 with a gain of around 51% over the issue price. It had made a similar gain on the National Stock Exchange too. As of mid-December, the price is trading above Rs. 140 per unit.

What is a secondary IPO?

Secondary offerings are usually conducted by investors who are looking to raise money for various reasons such as retirement or capital gain. Proceeds from a secondary offering go into an investor’s pockets instead of to the company.

In which companies did Zomato recently invest?

Zomato, which launched in 2008, has partnered with three startups namely Shiprocket, Curefit, and Magicpin. In November 2021, the company revealed its total investment of $175 mn in these three Indian startups.