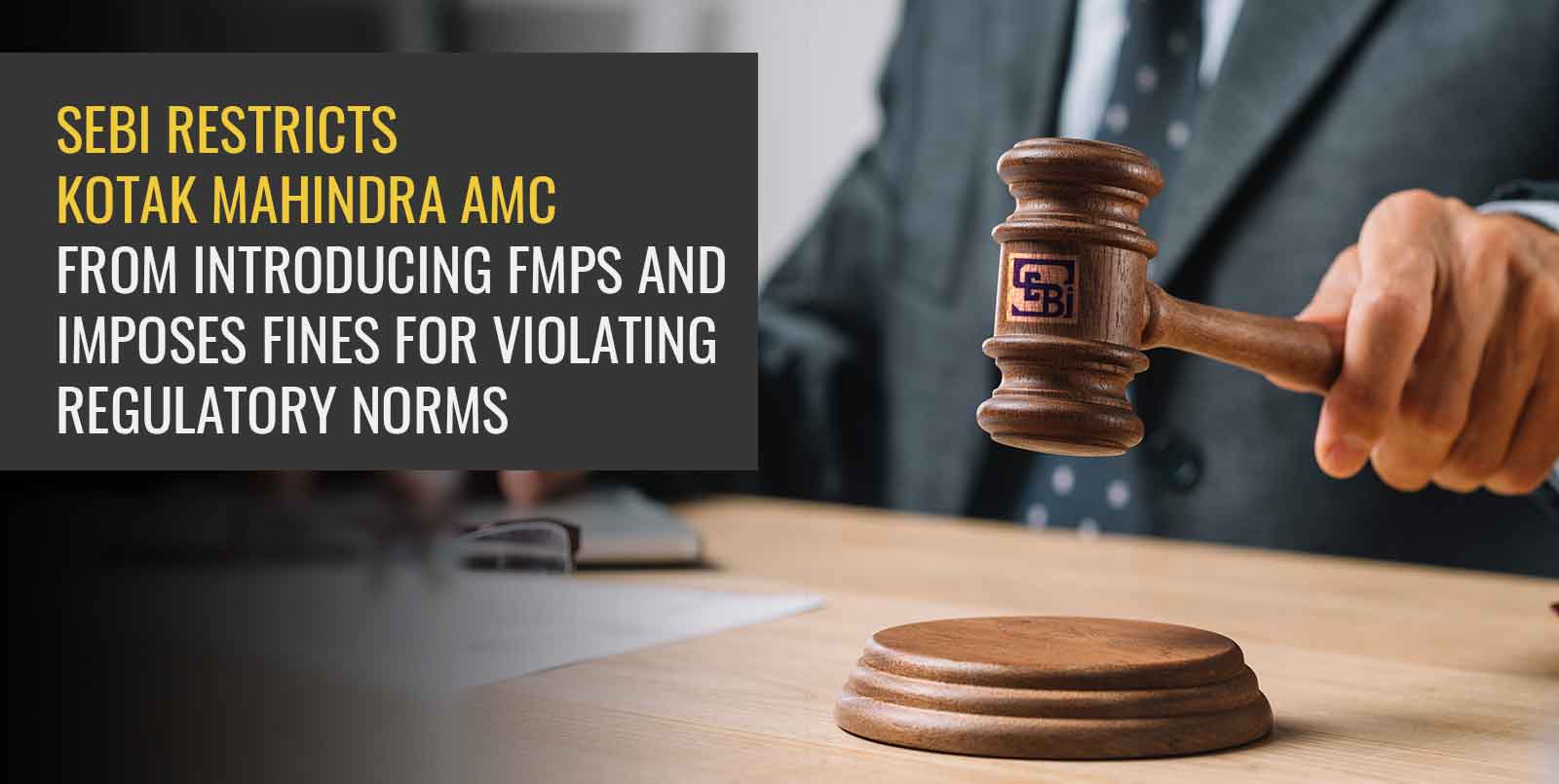 SEBI has recently barred Kotak Mahindra Asset Management Company (AMC) from introducing any FMP or fixed maturity plans for the upcoming 6 months. The market regulator also imposed Rs. 50 lakhs worth of fines on the AMC for violating provisions of the SEBI Act and hurting investor’s interests.

Let’s take a look at what caused SEBI to take strict action against Kotak Mahindra AMC and what this means for the company.

Among its many investments, Kotak has around Rs. 7000 crores in FMP assets as of August 2021. These are fixed-income funds that invest in debt instruments and have a maturity date similar to the fund’s duration. The fund house launched six FMPs (127, 183, 187, 189, 193 and 194), which invested in Zero Coupon Non-Convertible Debentures (ZCNCDs) of Konti Infrapower Multiventures and Edison Utility Works.

Both the issuers belong to the Essel Group, which in turn is the promoter of Zee Entertainment Enterprises (ZEEL) and several companies under the Zee Group.

On 25 January 2019, the scrip of ZEEL declined sharply and consequently, the share cover as collateral also fell.

At this point, promoters of ZEEL announced that they wouldn’t be able to provide additional collateral to secure Kotak Mahindra’s investment exposure. However, Kotak still entered into agreements with these issuers and thereafter extended the maturity of their ZCNCDs till 30 September 2019.

Their investment committee approved the investment on the presumption of receiving repayment without considering the financials of the issues. Following this, the company failed to pay investors of the six FMPs the full proceeds as per the declared Net Asset Value (NAV).

Thus, SEBI began investigating Kotak for putting FMP investor funds in stressed companies. The market regulator found that Kotak did not follow the due investment process or disclose any pitfall of investment to shareholders. SEBI also stated that their actions were in clear violations of certain provisions of SEBI Act 1992, 1996 and other circulars issued by SEBI.

Following the end of the investigation, SEBI imposed a fine of Rs. 50 lakhs on the company, which they must pay in 45 days. The market regulator also barred them from launching new FMPs for six months.  Moreover, Kotak would have to refund unit-holders of the FMPs a percentage of the investment advisory and management fees.

They would also have to pay simple interest at 15% per annum from maturity to actual payment.

What Does this Mean for Kotak Mahindra AMC?

Kotak Mahindra’s lack of diligence, sub-standard service, failure to research etc., has hurt investor’s trust and investments. This demonstrates that even debt mutual funds carry certain risks and don’t come with guaranteed returns. Hence, investors should always conduct careful research on the full terms and conditions of their investments.

Meanwhile, SEBI is keeping a strict watch on fund managers and will impose heavy penalties on companies that act against investors’ interests. This will restore the trust of investors and benefit the market in the long term.

SEBI imposed fines as they violated regulations and acted against investors’ interests by extending the maturity of poorly performing schemes. They had failed to practise due diligence and furnish research reports to investors.

According to the company, Kotak AMC decided against selling off the shares as it wouldn’t have guaranteed full recovery and could have led to a further drop in share prices.

According to Kotak Mahindra Group, all investors of the six FMP schemes have now been fully repaid with interest. The company has assured commitment to protect the investors’ interest at all times.